Books: The History of Dark Corner

Pioneers traveled, as early at 1827, in oxen-drawn wagons over Indian Trails to find their land. By 1837, the post office was in the postmaster's home; the church was a brush arbor; and students attended a one-room school. An 1847-1860 diary, that mentions 150 names, takes you through the daily lives of the people. During the Civil War, Confederate and Union troops were stationed at Dark Corner and foragers took from the residents. There is a list of Freedmen, after the war, who took a last name and registered to vote. Documents show claims filed against the U. S. Government for loss of goods during the war. 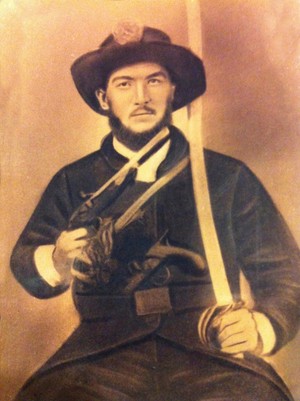 Many folks living in Villa Rica have heard the legendary tales of the Dark Corner community that was said to have existed somewhere just east of town. Two local authors have published their third book, confirming the existence of the historic district that little has been known about - until now.

John and Elaine Bailey have two published books under their belts already. The first was Tracks, a coming of age novel set in the 60s and the second was Explosion in Villa Rica, a non-fiction account of the 1957 tragedy, describing the violent blast of a gas explosion that ripped through the downtown business district, killing 12 and injuring 34.

Today they are finishing up their newest, historic venture, a non-fiction book about the Dark Corner militia district. The couple say the community of families was located in a valley, beginning off of Highway 78 over to High Point Road, bordering Villa Rica on its western side and South Flat Rock Road and Cedar Mountain on its eastern side.

"At the beginning of the project I talked to several local historians and they all said, 'good luck, there's no information out there about Dark Corner," John said, who has been doing research for the book for nearly two years with his wife, and co-researcher, Elaine. "Most of the information from our book has not yet been published. We had to dig real deep to find some of these stories."

The book covers the years 1827 to 1880 and breathes life into the stories of settlers who came in ox-drawn wagons, over Indian trails, to live in the Dark Corner district.

The post office was the postmaster's home; the church was a brush arbor and the students attended a one-room school, John described in an email. "Stories in the book tell of a great-grandmother who carried a gold nugget in her apron pocket and young boys who found enough arrowheads to fill buckets. An 1827 land owner salted his land with gold and then sold it for 15 times what he paid - until he was caught."

"This book is going to reveal some unknown history about the early days of Douglas County," John said. "This area was weirdly-stable. Families stayed there for five generations. I know of a man who's family got there in 1827 and is still living there."

"Every time we went to a courthouse or an archive, we found a crumb," Elaine said. "When we put all of those crumbs together, we had a book that will be nearly 300 pages. In the first three or four months, we weren't even sure there was a community there. Now it's a like a run away train going downhill. At first, it didn't look like we'd have a book with 100 pages."

Other stories in the book detail the sorrows of the Civil War, including a grandmother who lost eight grandsons and six of her granddaughter's husbands; two brothers dying within two days of each other. The book also lists former slaves, from 1866 to 1870, with their new last names and who they worked for after the war. Names of 120 Dark Corner men are listed, including 30 "colored" who, by registering to vote, had to take the Oath of Allegiance to the U.S. Government.

This month marks the fifth year I've been researching Douglas County's history, and I'll have to admit that while I find all of it interesting. some bits are more intriguing than others. Take Dark Corner, for example. Based on the name alone it's intriguing, right?

Add in a few family stories involving Native Americans, hints of gold, and Civil War references, and the area would curl the toes of any historically minded person.

It was intriguing no one person had ever committed to gathering the resources and publishing the Dark Corner story until John Bailey embarked on his most recent project. Assisted by Elaine Bailey, a published author in her own right, John tacked the monumental task of gathering the history bit by bit.

Bailey's book "The History of Dark Corner," made its debut at the end of the summer.

The book tackles the questions concerning the unique name of the community and provides various philosophies regarding where the name Dark Corner originated. Key pioneer families are identified with complete genealogies. Family stories are also included in some cases and numerous photos are scattered throughout the book.

While most research projects tend to begin at the beginning and move forward, Bailey chose to begin looking for Dark Corner clues scattered throughout Douglas County history in the 1880s and then progressed backwards to 1827 when the Kennedy (Canady) family first settled in the Dark Corner area of then Campbell County. At that time, Native Americans were their nearest neighbor.

When pressed, Bailey advises the project's standout achievement is he was able to identify two distinct Dart Corner communities - the original settlement and the location many identify as Dark Corner today.

My friend, John, should be very proud.

His book is the first definitive history published on the Dark Corner community, and it is based on historical sources such as diaries, maps, deed records, interviews, school rolls, post office records, census records and many other sources.

"The History of Dark Corner" would make a great Christmas gift for that special someone who enjoys local history. It is available for sale online at Lillium Press (lilliumpress.net), Amazon, and Barnes and Noble.

Locally, it is available at Douglasville Books; the Douglas County Museum of History and Art, located in the old courthouse at 6754 W. Broad St.; Bankhead Diner; Corn Crib Store; and Pine Mountain Gold Mine Museum. The book can also be found at Acra Printing and Dollar Daze in Villa Rica.

Upcoming speaking engagements for Mr. Bailey include the Douglas County Historical Society on Jan. 15 at noon. The group meets at the Cultural Arts Center at 8652 Campbeliton Street and Forrest's Escort Camp, Sons of Confederate Veterans in Willa Rica on Jan. 26th at 6 p.m.

Lisa Cooper writes the amazing stories of Douglas County each Sunday. You can also find her Facebook page for Douglas County history under the name "Every Now and Then," and you can follower her on Instagram and Twitter @LisaCooper513.